Working on a micro frontend architecture usually means splitting up a monolithic site and its sections into different parts, where each part (or individual site) can be owned and worked on independently by different teams, each with their own product owner, stakeholders and autonomous release trains, and yes you guessed it - integration tests.

Going forward try to imagine a site where the /foo url is owned by team foo, the /bar url by team bar and global tests are owned by both.

In this post we're going to take a deep dive into setting up scheduled integration tests with Cypress and making everything run across multiple pipelines on Azure Devops.

The project scaffolding for supporting multiple sites is easy, just think of it as a bunch of test commands pointing to different folders like /integration/foo and /integration/bar.

This way each site and team could have their own root folder housing all their tests.

For DX, it's important to setup a file that knows about global things like settings and environment variables.

This is how this settings file could look like:

Cypress looks for a local cypress.env.json file if it cannot find the specified environment variables

Let's look at the main test pipeline. First of, we set it up to trigger when our master branch changes. Then after requiring NPM we specify that we want to pull in a variables group for QA (more about that further down).

Next, we setup a scheduled 45 minute cycle cron job and install the dependencies specified in the package-lock.

The order of the cron syntax goes like this:

(doing so makes them available to us within our tests)

Then we run all of our tests, meaning every .spec file that Cypress finds.

After running our tests we make sure to publish the test results and the captured videos regardless if the test pass or fail.

Lastly, we publish the main artifict given all test pass.

This is how the testing phase of one of our micro sites could look: 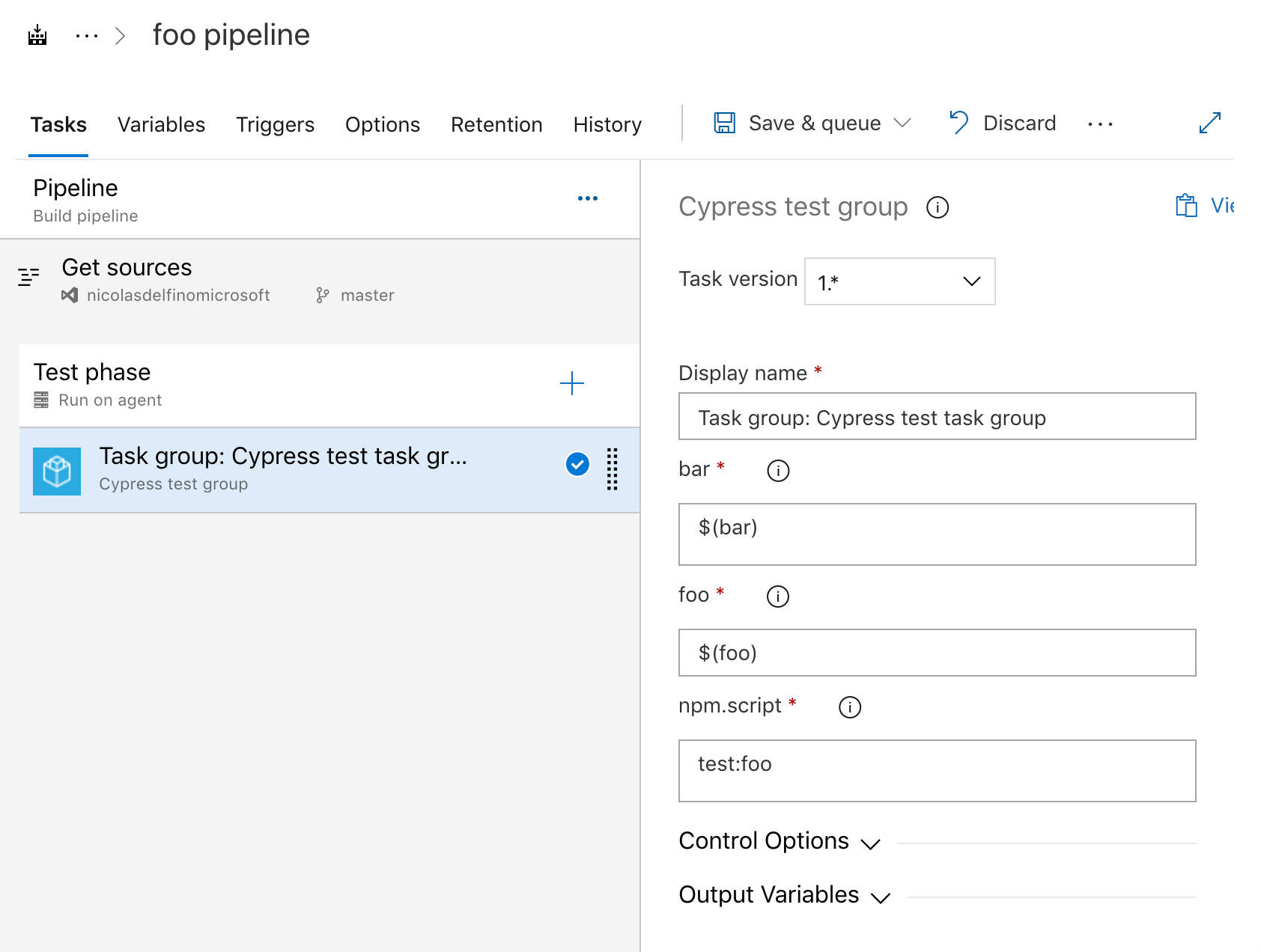 This phase would typically be after the deployment phase so that the tests are run on the live environment.

As you see on the image, we're using an Azure task group since the only thing different between our test phase for our foo and bar pipelines are which tests we should run (notice the npm script)

Variable / task groups are great when you need to reuse functionality across multiple pipelines. Let's have a look at how both of these work.

In our case we create two:

Remember our script phase in our YAML file? This is where the variables foo and bar are specified and given different values depending on the environment.

A task group is a set of reusable commands, written in either GUI blocks or with YAML.

As I wrote earlier, the reason to why we need one of these is because we're going to have multiple pipelines and want to avoid writing the same thing over and over again. Right now we only have the foo and bar sites, but in the future this could scale into more sites.

Our task group will test one of our sites based on a dynamic argument, more specifically:

The dynamic element to our test group is setup like this

As you see from the code above, the task group is dependant on the pipeline using it to not only include the appropriate variable group but to also specify which test script the task group should initiate.

Trigger tests on other environments

Remember that if everything goes as planned and all of our tests pass, the YAML file has instructions to create and publish a second artifact named cypress-drop.

This artifact is what you could use as a trigger to setup a release pipeline that could run your tests against some other environment like prod or pre-prod, just remember to load in the correct variable group.

The idea behind this post was to show a simple way of having one single repo host different tests for multiple sites and connecting the dots in Azure Devops.